Fall is the new spring in real estate

Record-low mortgage interest rates, the increased need for more spacious, multifunctional homes during the coronavirus pandemic, and timelines that no longer necessarily revolve around the start of the school year have fueled homebuyer demand so much that fall is looking more like a new spring in the housing market this year.

“This spring was like no other,” Brian Rubenstein, senior director of mortgage at online lender Ally Home, told Inman in a phone interview. “The pandemic and the market dislocations were quite unprecedented.”

Due to the pandemic, the Federal Reserve has kept interest rates low in an effort to shore up a faltering economy, and rates for 30-year fixed-rate mortgages have been hovering around 3 percent. This week, National Association of Realtors Chief Economist Lawrence Yun declared that 2020’s housing market was outperforming 2019’s housing market and predicted that this year’s home sales would end up higher than the 5.34 million homes sold in 2019.

Rubenstein doesn’t expect rates to rise and that means that the market will likely see what he called an “extended spring cycle.”

“We’ve begun to see a steady increase in people hitting the market, inventory remains lower than usual, but at the same time, with demand being so high, we’re seeing the average home price jump dramatically.

“For the first time we’re also seeing the new entrants into the market — first time homebuyers — not really being scared off by that. They’re really looking to settle in and really begin their home purchase journey, given everything that’s happened in the current landscape.”

Ally saw a delay in the spring market that lasted about two months. Whereas the market typically starts heating up in March as homebuyers figure out where they want to be for the following school year, this year it wasn’t until May that mortgage application volume started picking up, according to Rubenstein.

“Our app volume’s up close to 160 percent of where it was year over year. The purchase market has begun to pick up steam as the refi wave continues to dwindle a little bit,” he said.

“I would expect us to continue to see a steady pick up in purchase volume through the remainder of this year and … [stay] buoyed by the spring market next year,” Rubenstein said.

While there is usually a dip in mortgage volume around the holidays, whether there is one this year is up in the air, in part because people are less likely to travel extensively until there’s a vaccine, according to Rubenstein.

“If folks are not open to traveling during the holiday season, it could present an opportunity for us to continue the continued climb in the mortgage space,” he said.

Additionally, companies that are currently having their employees telecommute could decide to extend that arrangement, allowing people to ditch their previous commutes and “re-tether” themselves to an area that’s more important to them because it’s closer to relatives or a particular school, according to Rubenstein.

“It could help perpetuate … the late spring market through the fall, through the winter, into the following spring,” he said.

Because school is unlikely to be solely in-person, that could encourage families to move around more as well.

“If the caregiver or parent is remote, and the child is either remote, or there are going to be multiple options in the future for children to facilitate learning, whether it’s through virtual or e-learning, that provides a lot more flexibility optionality for folks when they’re making home purchase decisions,” Rubenstein said.

“People are going to be thinking about that probably in a different way, given the landscape of the environment. I think that could help further stimulate this market that we’re seeing now and continue on at least through some point next year.”

Real estate data firm CoreLogic saw home prices rise 5.5 percent year over year in July — the highest rate since 2018. Real estate brokerage Redfin saw home prices rise even more in the markets it operates in — 8.2 percent — canceling out a 6.9 percent increase in buyer purchasing power due to low mortgage rates. The firm attributed the price increases to a combination of low inventory and high buyer demand.

Instead of experiencing their usual fall decline, home prices will at least hold at their current “record high levels” for the next quarter, according to Mike Simonsen, CEO of housing market analytics firm Altos Research. Simonsen hosted a webinar Thursday titled “The Key Data to Watch Right Now in Real Estate.” 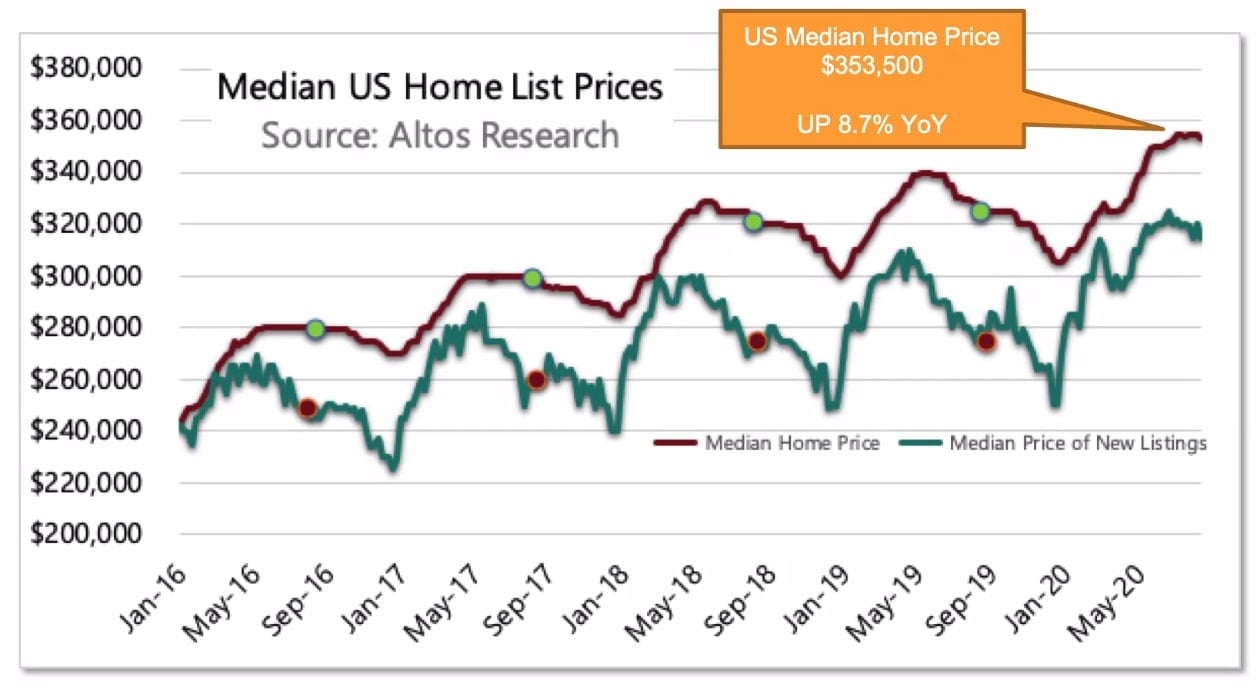 “Normally where we are in late summer is the high and we’re starting to reduce prices before the end of the year. We don’t want to be stuck with a home in November that’s been on the market since July, so they get cut,” he said.

“[This year] our whole seasonal reset is way lower than a normal year. Twenty-five [or] 26 percent instead of 36 [or] 37 percent of homes are taking price reductions. That’s because there’s demand in the market. That’s homes getting listed and sold quickly. That’s multiple offers, and that says that the homes that are listed now in the prices that we’ve got now hold up for transactions that happen later in September, in October, November.”

That demand is being met with shrinking inventory. Altos predicts the number of single-family homes for sale will continue to drop through the end of the year.

“We had just a couple of weeks in March of climbing inventory in 2020, and then the rest of the year when normally we’d have all this inventory increasing, inventory dropped rapidly every week from April all the way through,” Simonsen said.

“It’ll be flat for a couple of weeks here in September and then you can expect the majority to pull back. The second week of January is when we get our inventory turn. It starts the new listings for the springtime. We may be at 378,000 homes for sale for the whole country. It’s insanely low. That would be half of what a normal January would start at and like a third of what a healthy market would be.”

Altos expects that some homes will come on the market as the first six months of mortgage forbearance end for some homeowners at the end of September. At that point, some will decide to sell their homes, but most will re-extend their forbearance period so that it ends in March, which may mean new inventory in April, according to Simonsen. Still others who are currently in forbearance but not responding to their lenders may go into foreclosure on January 1 as the current foreclosure moratorium ends, or may decide to sell to avoid foreclosure, he added.

“Because prices are high, equity is at record levels, homes are moving fast, it seems unlikely that we’re going to get a wave of foreclosures, but more likely that we might have folks that say, ‘Well, I’m going to take my cash now,’” Simonsen said.

“For Realtors that communication of the opportunity to walk away with your cash pretty quickly because demand is high is a listing opportunity to take advantage of.”

In response to a post on Inman’s Coast to Coast Facebook page, real estate pros mostly expected the fall market to be as busy as their spring normally would be.

“The [Washington D.C.-Maryland-Virginia area] has been extremely busy,” wrote Don McGlynn, associate broker at Compass. “Low inventory is resulting in a price squeeze. Things would have to change drastically for that to slow down in the fall.”

“We are still seeing low inventory and multiple offers on many homes,” he added. “30 years in the business and I have never seen this before.” But, he added, “[R]eal estate is cyclical. I think when the pandemic is over we will see more homes coming on the market. It should lead to a more balanced market.”

“In the Chicagoland market as long as people don’t have to commute to an office to work in, we will continue to see homes selling in specific price points where home buyers can have the separate living spaces to accommodate the household needs for working and education as well as greater outdoor space,” wrote Andrea Geller, a broker at Berkshire Hathaway HomeServices Chicago.

“For the most part I haven’t had a lull and still continue to get new opportunities with new and past clients, which is giving me a good pipeline of business,” she added. “One of many [factors] choking up listings and some buys are the courts are so behind that sales that are a result of things like divorces or estate issues are on hold until the right to sell them is there.”

Glenn Phillips, CEO of Lake Homes Realty which operates in 30 states, anticipates “above-average buyer demand continuing, and the deal flow continuing to be limited by low inventory through the [f]all.”

But he predicts the repercussions of the pandemic to hit next year. “After the stimulus money runs out (sooner or later, even if there is another round), this tempo may change as the economic scars from the pandemic will become more obvious to the markets and the economy. The election outcomes will also influence the tempo of the market next year,” he wrote.